there’s so much to see in egypt, and the 3 weeks that we have here really isn’t enough to see even the highlights… especially since we ended up spending like 11 days in dahab diving and relaxing. we’ve really been avoiding booking any organized tours, but we realized that with only a few days left here, the only way to see the things we wanted to see was to just go ahead and book one. even with the tour, time was really tight, and over the last few days we’ve crammed in so much stuff!

3 days ago, we arrived in Aswan around noonish and by 1pm we were already on a minibus going to our first site. after a brief stop at the high dam of aswan (not particularly interesting) we boarded a small boat to get to the temple of philae which is on a small island in the nile. interestingly enough, this temple which is thousands of years old, actually used to be in a different location, but when egypt built the high dam, the island where it was located got flooded, and they had to take the temple apart into 40,000 pieces, and rebuild it in it’s present location. i can’t even imagine what a complex task that must have been! the temple was pretty cool, and we also got to wander around inside it where we saw lots of egyptian hieroglyphics.

after the temple, we went out to a restaurant on the nile with these canadian guys, andy and jeff, who we’ve been hanging out w/. it’s funny, over the last month or two, we really haven’t spent hardly any time jus traveling by ourselves. pretty much everywhere we go, we’ve ended up meeting up w/ new people and hanging out w/ them for the next several days. it’s been really cool meeting with and traveling w/ these people from all over the world. the only thing that sucks about it, as i said before, is that you have to say goodbye to people so many times! although, as we get to know more and more people from vancouver, i’m starting to think that one day we’ll have to go up there and visit, so some of these goodbyes might not be permanent.

at the end of our meal, the waiter came by and tried to charge us like one and a half times as much for our meal as it should have cost. if there’s one thing we’ve learned about egypt, it’s that you really really have to take care here if you dont want to be ripped off. more than any country so far, we’ve had people try to swindle us out of money here. most of the time we try to just take it in stride and also be cognisant of what’s going on, but sometimes it really does get frustrating. after dinner we went to bed straight away since we needed to get up ridiculously early the next morning.

at 2:45 am we woke up for our next tour. ugh. we were so damn tired. we were going to abu simbel, a tiny spot just 50 miles from the southern border of egypt, and the only way to get there was to travel w/ this armed convoy. after 3 hours of driving and us trying to get at least a little sleep in the van, we arrived at abu simbel. it’s famous for the 4 *humongous* statues of ramses the 2nd that are sitting in front of the temple. i wish that the photo below did a better job of giving you an impression of just how huge these statues were. they’re actually about 67 feet tall! we were so in awe of these incredible statues. it’s just unbelievable that 3,300 years ago, people were able to build a lifelike statue that is this huge. absolutely monumental.. 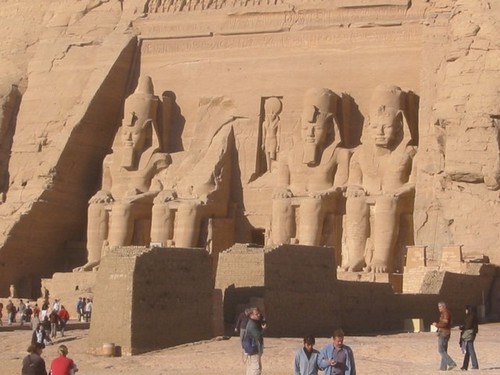 a few hours later, we were with the armed convoy back to aswan. we spent a few hours in town and then straight away had to get on a train to luxor, our next stop. did i mention that this was a whirlwind tour? 6 am the following morning, we were up and getting ready to go out and sightsee some more. ouch! the modern city of luxor is where the ancient city of Thebes used to be. the city has a ton of different monuments on both sides of the nile which passes throug the center of town.

our first stop was the valley of the kings. this is where the egyptian pharoahs were buried along w/ all of their tresures. we got to go inside a few of the tombs, the walls of which were completely covered in hieroglyphics. since these were inside underground tombs, the colors of the hieroglyphics were preserved and you could really see how cool they must have looked thousands of years ago. it was crazy just how much of them there were. every single foot of every single wall was completely covered w/ these intricate writings and drawings. there’s something really cool about hieroglyphics since they are all made up of tiny pictures instead of letters. it definitely gives them an ancient and unique feel as opposed to other ancient writings. unfortunately, we weren’t allowed to take photos inside the tombs, so i dont have any pictures of the colored hieroglyphics, but here are a couple photos of the etched ones i saw elsewhere… 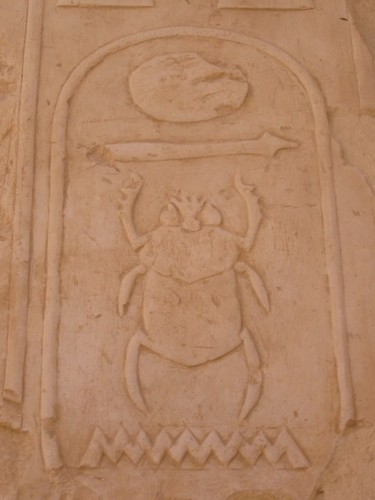 next we went to go see the hatshepsut temple, a huge multilevel temple where terrorists massacred 68 toursits in 1997. nowadays, this place has tons of armed guards to prevent something like that from happening again. phew! next stop was the valley of the queens. the queens tombs were a little less intricate than the tombs of the kings, but still quite interesting. one of the tombs even had a little foetus mummy on display. apparently, this foetus was going to be a prince, so even though it was never born, it got mummified and buried here in the tomb. unfortunately, the most beautiful of all of these tombs, the tomb of nefratari, was closed for rennovations. we managed to squeeze in a quick stop to the colossus of memnon and then hurried to lunch. our day was far from over… 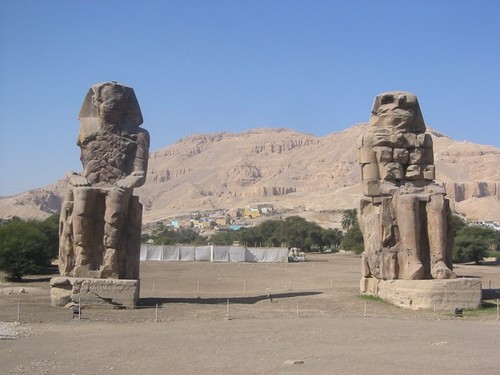 after lunch, we went to go see the luxor temple and the karnak temple. both of these were huge sprawling temple complexes filled w/ statues, gigantic inscripted columns, and obelisks. once again, there were hieroglyphics *everywhere*. so cool! during these last few days, we’ve had a tour guide that has explained the meanings of all these places, what they were used for, when they were built, etc etc but we’ve gotten sooo much info over the last few days that i highly doubt i’ll remember any of it.

with that, our tour was done. today we actually got to wake up at a decent time for once and we’re gonna spend today just lazying around luxor. our canadian friends left on the train last night, so there was yet another sad goodbye….